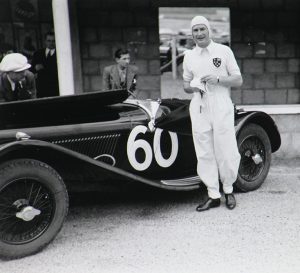 In our next edition we are publishing a story about the first S.S. Jaguar 100 to ever win a race.  It was chassis #007.

Its driver (and probable owner at Reims) was Australian Freddie McEvoy, very close friend of fellow Australian Errol Flynn, Woolworth’s heiress Barbara Hutton, and also the best known socialites in Britain, Europe and the US.

Freddie was born in Melbourne in 1907, and died after a multi-fatal boating disaster in Morocco.  But his colourful life has been misreported and scandalised ridiculously and we will set the record straight on the man who can’t defend himself.

He also was the flag bearer for Britain in the 1936 Winter Olympics, won bronze in the bobsled making him Australia’s first Winter Olympics medalist, and won gold at the world championships.

He was in movies, but is most infamous for bedding heiresses – sometimes marrying them – even if they were half his age, or double even …

He raced in the US 1936 Vandervelt Cup with success – and always entered himself as Australian, adorning his cars with the Australian flag.

There is so much to learn about Freddie and I can promise you will be fascinated by his Jaguar association and entire life as me.