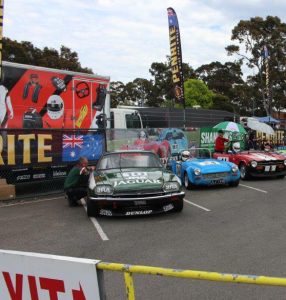 The annual historic race meeting at Sandown in Melbourne attracted the usual large field of cars, but one of the most welcome was Mike Roddy’s famous and time capsule-like TWR XJ-S which won the Spa 24 Hours race in 1984 and Bathurst the next year.

It had a scrape at Bathurst his year in a support event, but such was the limit of that mark on the car that it set the fast lap of the race even after that!

The panels were all retained and repaired very quickly.

So at Sandown Mike brought it along again for another of its rare outings – and came home with two second places and another fastest lap.

He loves the TWR XJ-S and has owned it for close on 20 years, but his real thrill is demonstrating it to the public by driving it on the track when these opportunities arise.

It is the finest, as good as untouched example of all seven TWR XJ-S Jaguars, of which four remain – all of the 1984-built cars.  Adding to the significance, the man who headed the entire Bathurst operation from the start, Ian ‘Blue’ Dorward, flew in to me with Mike and the car too.

We will have a major feature in the coming edition on the return to Bathurst in 2022 of the 1985 winner.