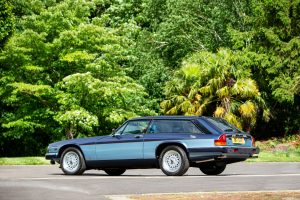 A Jaguar XJ-S converted into a Shooting Brake by coachbuilder Lynx will be auctioned off in a couple of days at Bonhams’ Goodwood Festival of Speed auction.
The XJ-S premiered back in 1975 and eager to offer its customers something unique, Lynx decided to develop a Shooting Brake version, launching the vehicle in 1982 as the Eventer. This particular model is more special than most.
Impressed with the Lynx Eventer, the former design director and vice-president of Gucci, Paolo Gucci, approached Lynx and started to work with them to develop a special Gucci variant of the Eventer. The finished car was presented at the 1990 Geneva Motor Show but the fashion house didn’t want its name attached to the project, so all Gucci branding was removed and while there were plans to build 20 units, a production run never materialized, leaving this as the one and only Gucci Eventer.
Subscribe at
www.jaguarmagazine.com
Category: NEWSBy Les HughesJune 21, 2022Leave a comment

JAGUAR FINALLY TELLS OF ITS NEAR FUTURE CARS AND PLANS – AUTOEXPRESS
June 16, 2022