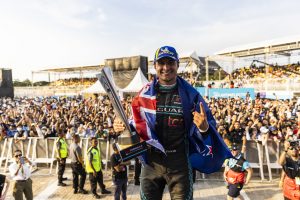 Mitch Evans secures his third victory of the season for Jaguar TCS Racing at the inaugural Jakarta E-Prix.

In South East Asia’s most populous city and in front of the Indonesian fans, Mitch Evans lined up third on the grid after a successful qualifying session saw him make it through to the semi-final stage of the Duels. In the hottest race of the season so far, the 27-year-old held his position as the lights went green. He then went on to overtake António Félix Da Costa before battling with Jean-Éric Vergne and Edoardo Mortara in an intense and strategic battle for the lead of the race. With six minutes to go, Mitch made a daring overtake on Jean- Éric Vergne to move back into first place of the Jakarta E-Prix and held the lead until the chequered flag fell. 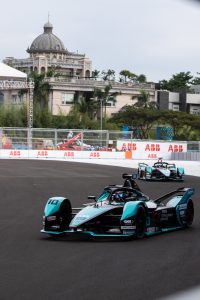 The Kiwi also secured the fastest lap of the race with 1:09.786, demonstrating the pace of the Jaguar I-TYPE 5 in very challenging conditions.

Sam Bird also had a fruitful race, carving his way through the field from fourteenth to finish in ninth, securing valuable points for Jaguar TCS Racing. The British driver also demonstrated the pace of the Jaguar I-TYPE 5 throughout the duration of the race and made eight decisive overtakes in his march forward.