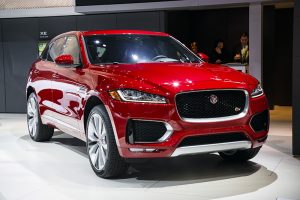 Three new high-luxury, high-priced SUVs look set to lead storied British luxury brand Jaguar’s all-electric push upmarket, according to a new report.
British magazine Autocar reports three large SUVs will lead the reinvention of Jaguar in 2025, which has been confirmed to see it shift from a BMW or Audi competitor, to a maker of lower-volume, more exclusive cars akin to Bentley.
All three models – built in Jaguar Land Rover’s Solihull plant – will share a new electric-only platform known as Panthera, with “similar mechanical packages”.
There won’t be successors to the E-Pace and F-Pace; instead, the smallest model in the new range is said to be sized similarly to a Porsche Taycan wagon, at just under five metres long, and over two metres wide.
The Autocar report specifically references the low-riding Taycan Sport Turismo wagon – however all three new Jaguars are expected to take the form of more conventional ‘crossover’ SUVs.
Three-door and five-door versions of the smallest new Jaguar SUV will be offered – though positioned as standalone models – with a choice of single-motor, rear-wheel-drive and dual-motor, all-wheel-drive powertrains.
According to Autocar, the flagship Jaguar will be a larger SUV with a 200mm-longer wheelbase, standard dual-motor all-wheel drive and “luxurious rear cabin appointment and space” aimed at the US and Chinese markets.
Jaguar is said to be targeting about 50,000 sales per year, according to Autocar.
Autocar says the first of the new Jaguars will be previewed by a concept in 2024.
We say – a line has be drawn already under the original Jaguar traditions and this has be be regarded as a different Jaguar Cars Limited.
Subscribe to Jaguar Magazine
www.jaguarmagazine.com
Category: NEWSBy Les HughesJune 29, 2022Leave a comment