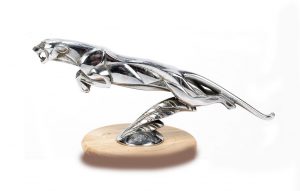 I’ll bet you think this is the usual leaping Jaguar mascot – but it isn’t!!!
It fooled us too because this mascot was designed and created in France in 1925!
So in our next edition we delve into it and the accepted look-alike official Jaguar ‘Leaper’ designed in 1938 by Frederick Gordon Crosby in England.
That was after the French designer and sculptor had already died.
Accepted fact is not always the truth.
Get Jaguar Magazine to in mailbox
www.jaguarmagazine.com
Category: NEWSBy Les HughesJuly 7, 2022Leave a comment