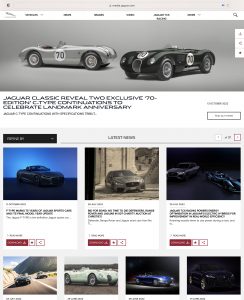 While we are being honest and frank about Jaguar’s management by JLR, and deeply concerned for its century old life, consider this.
Jaguar Land Rover has its own media site for journalists to use as a resource for publicity and information. It has been very successful and busy in the past, and we as Jaguar scribblers would never complain about the Jaguar side of the joint site.
However, symptomatic of these troubled times, the media site has gone barely used by JLR in 2022 – for which we all need to be sad.
Their supply of classic Jaguar images are very stale and limited in number, but most tellingly, in the second half of 2022 articles for use were published on July 25, then July 28.
After nothing at all for almost three months, two more were launched on October 11 and October 13. That’s it …
To date, not even the news of the CEO’s ‘resignation’ has not been revealed on either Jaguar or Land Rover’s news pages at its own media site.
Who could have believed it has come down to this state of affairs? There will be no holding back in our next edition – and I don’t think anyone at JLR will care!
www.jaguarmagazine.com
Categories: Events, Gallery, Home products, Home-blog, I-PACE, Industry, Jaguar E-Type, Jaguar F-Pace, Jaguar F-Type, Jaguar Racing, Jaguar XE, Jaguar XF, Jaguar XJ, Latest Issue, NEWS, UncategorizedBy Les HughesNovember 17, 2022Leave a comment