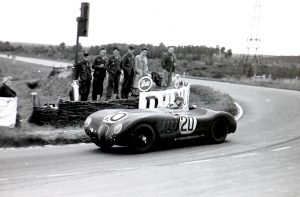 We have been posting here the news that we have found one of the first three C-Types built in 1951 for Jaguar’s first official factory race.

It was Le Mans – and the C-Type won first time out – establishing the way for Jaguar at Le Mans and seven victories there.  Each of the 1951 C-Types is officially listed has having been dismantled by Jaguar as early as 1953.

We have all wished they had been retained for history – but not so.

Well, we got an inkling so have researched deeply and found one of the three cars really does exist!!!  And we know which one.

Well believe it or not, we have now found the body too – minus bonnet – but we know where it is also!  We have had fabulous discussions with the owner of the body.

I will explain the entire story in our coming edition, and make it perfectly clear that its true, which chassis it is and its entire unbroken history.

It is not to be missed, and along with finding the original London Show 1948 XK120 in the USA, it is the most historical car we have found through publishing this magazine.

Get your subscription right now and don’t miss getting the full story – and much else too.