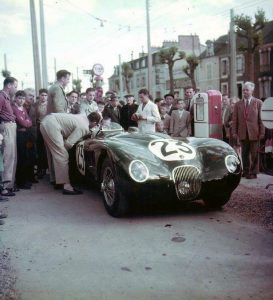 Ever since Jaguar wrote them off in its record books, dishonest types have been claiming they have found one of the first three scrapped 1951 C-Types – chassis 1, 2 or 3!

All have been debunked – and with good reason.

Believe it or not though, it is possible we have have defied logic and discovered the existence of one of those historic cars!  True.

We are still investigating, but may be on the verge of confirming one genuine 1951 Le Mans racers which now carries a different chassis identity and has done for decades.

The factory often reused its racing sports cars to replace damaged C and D-Types including C-Type XKC047 which it restamped XKC047 – and not for any reason which you might call ‘dodgy’.

We can’t say which one of the 1951 cars we think our car in question could be, but all will revealed in edition #212 …

Wouldn’t it be wonderful!

We have already discovered the first 1948 London Motor Show debut XK120 which is alive and well in the USA – so don’t discount what we are onto!