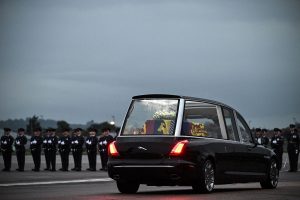 Throughout the day, spectators in London who had gathered to watch Queen’s funeral procession were able to catch glimpses of her coffin carried first in the Royal Navy Carriage and then later in the state hearse. The latter is a new addition to the royal fleet, which was built by Jaguar Land Rover in consultation with the Royal Household and the Queen herself.
Like other vehicles in the royal and state fleet, the hearse is finished in Royal Claret. It features expansive rear windows and a glass roof (apparently requested by the Queen), which offered a full view of the Queen’s oak coffin. It is also outfitted with the Queen’s personal royal cypher.
The Queen and her husband Prince Philip were both fans of vehicles manufactured by Jaguar Land Rover.
SUBSCRIBE TO JAGUAR MAGAZINE:
www.jaguarmagazine.com
Categories: Events, Jaguar XJ, Latest Issue, NEWSBy Les HughesSeptember 20, 2022Leave a comment